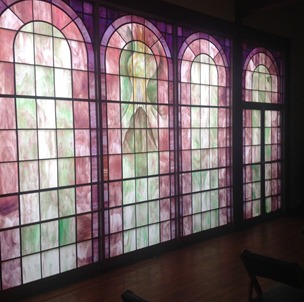 Besant Lodge has quite a history...  Originally built as the first Independent Silent Movie Cinema in L.A. the theater showcased many of the famous silent era films. During this time it was also used as a private preview club for directors to share their new works with each other. Along the way in the 30's and 40's, actors such as Orson Welles and Joan Crawford did some local theater here as part of what was called "The Beachwood Players". It became our present day Besant Lodge when the cinema was bought by the Theosophical Society in the fifties. Beachwood Canyon at that time had a large Theosophical community who were dedicated to both Spirit and Art. These same local Theosophists built venues like The Hollywood Bowl (for example). In it's Theosophical incarnation, Besant Lodge has welcomed lecturers worldwide, including; Aldous Huxley, Gerald Heard and Manly P. Hall. Today the newly renovated Besant Lodge continues all of these rich traditions by hosting unique speakers, artists and events from around the globe.